I’ve wanted to visit Greece for as along as I can remember, and this summer I was lucky to have the chance to explore both Athens and Santorini!

Everyone has their different reasons for traveling, but when I go to a city I like to explore and soak in as much knowledge about it as I can, and we definitely accomplished that while we were in Athens – a place rich with history and so much to see.

First things first – if you’re staying at a hostel, ask if they have free walking tours. Lots do, like ours did. We had a super cool, authentic half Greek half British tour guide, who guided us through the city (in 41C … it was hot!) and pointed out and explained a ton of neat things. We even walked all the way to, and hiked up some rocks and hills to see the Acropolis … but I’ll get to that in a minute. Athens was filled with so many beautifully vibrant buildings which I loved! Every doorway was an opportunity for a photo. The best part of the walking tour was seeing the Temple of Hephaestus, which is actually Athen’s most well-preserved  temple, but one of the least known to tourists. Hephaestus was the patron god of metal working, craftsmanship and fire, and he was also one of the least attractive gods – so, the Greeks don’t boost too much about this temple, but it really was beautiful.

Our hostel, located in a central square in Athens (Omonoia Square) is actually the oldest square in all of Athens, and very close to tons of different restaurants. It was easy to grab some food whenever we were hungry, which was great.

We bought a Hop on Hop Off bus pass for 2 days in Athens, and it was definitely worth it – I would highly recommend purchasing a pass if it’s your first time in Athens (and really, any other big cities for that matter), because it really does give you access to all of the major sites in a few hours.

You can choose to “hop off” on any of the bus stops, or continue to ride the bus and listen to commentary about each location through the free audio they have attached to every seat. Here are a few highlights that we saw on the bus tour, and during our walking tour as well.

This was a major bucket list item for me! I’ve always wanted to come to Athens to see the Acropolis (and Parthenon), mainly because I went through a period as a kid where I was obsessed with Greek God and Goddesses, and the different stories about them. This was one of the stops on our Hop of Hop on tour, so we were able to get off the bus and walk up to the Acropolis and purchase our tickets to go inside. 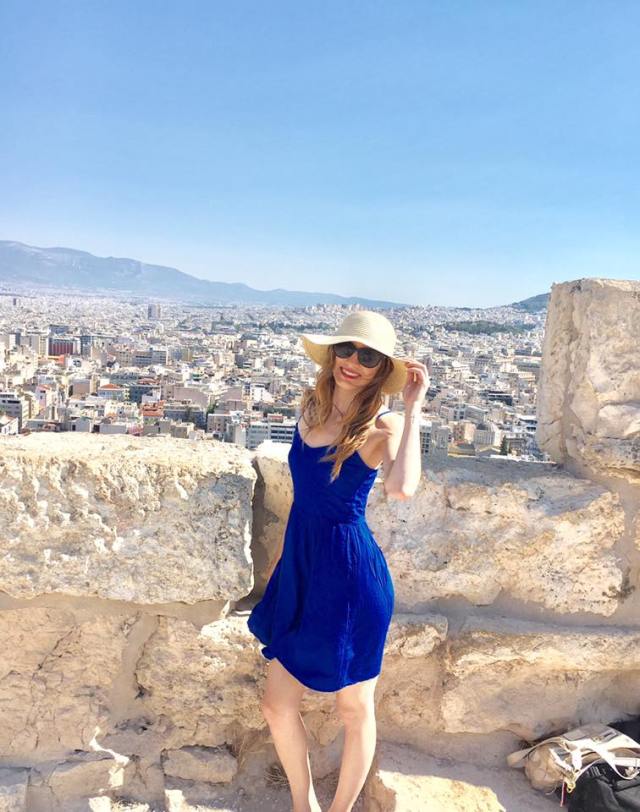 The area itself rests atop of a rocky hill that looms over the city of Athens. It contains several remains of ancient buildings of major significance with the Parthenon being the most important. 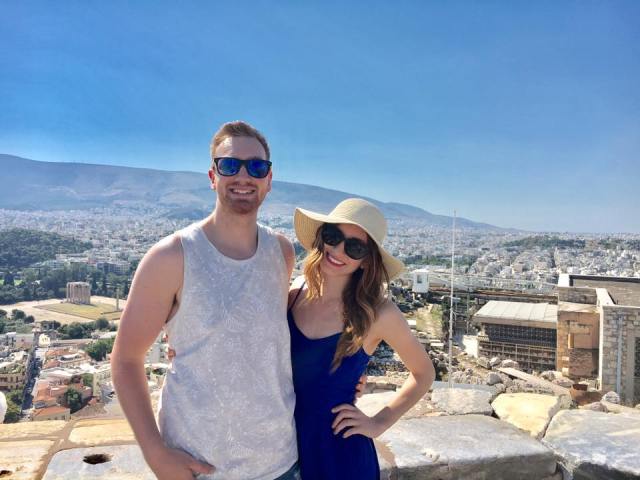 The Parthenon (above) is a former temple that was dedicated to the goddess Athena, who is considered the patron of the city (hence the name of the city, Athens). Athens is still currently in the process of restoring the Acropolis, so that’s why you’ll notice some other elements around the temples in my pictures.

It really  a great experience to be able to walk around the Acropolis and see the ruins. There were many different temples scattered around the rocky landscape, and the view of the city from above was amazing as well.

Another highlight that you will find on the Acropolis – Ares Rock. This rock is where the first Christian sermon in the world took place. The story goes that an apostle came and preached to the Greek about worshipping one God, rather than the multiple Olympian Gods they worshipped. We were told that this is the spot where Christianity began in Greece! It also gives you a great view of the city. 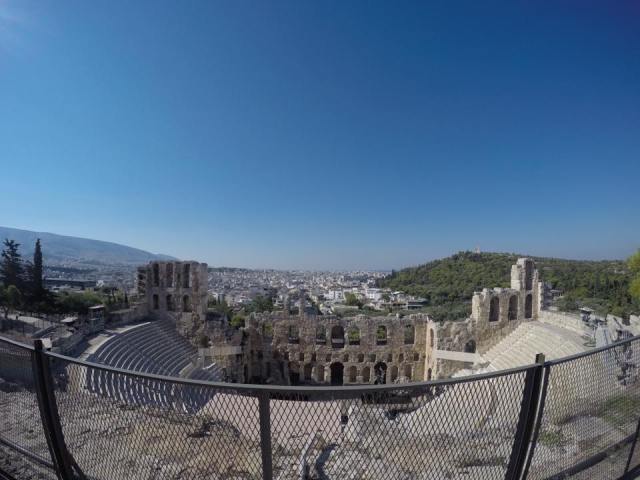 The Oden of Herodes Atticus is a theatre constructed entirely of stone on the southwest slope of the Acropolis. It’s been around since 161 AD! The coolest part? Concerts are still performed there to this day.

Another stop on our bus tour was the Temple of Zeus. While it is mostly destroyed now, there are still some ruins to see. We paid 6 Euro to get up close and personal, and it was worth it, because you can take really great photos, but you can see the temple quite easily from outside the gates without paying to go in.

One day when we ventured out for a walk, we stumbled upon the National Library. The reason I list this area as a highlight is because the architecture is truly just stunning. I was blown away by the white, crisp lines and columns that lines the streets – it was like being transported back in time.

We were able to visit the world’s first Olympic stadium in Athens. We paid to go inside, and then were given free audio tours. We popped our headphones in, and the audio tour guided us  through the stadium, explaining how it was created, who participated in the games, and what certain elements around the stadium meant. We even got to sit in some chairs (pictured below) that in the past were always reserved for royal guests to come watch games and other matches that were held within the arena.

Another amazing highlight was that we were able to walk through the tunnel that athletes used to use to enter the arena. Apparently wild parties were also held in these tunnels, thousands of years ago. The tunnel eventually lead to a museum, where there were a variety of Olympic torches from around the world to be seen.

Some other places that we saw while we were in Athens included Parliament, and a variety of different markets. For anyone who is interested in history, this is a place to go!

Have you ever been to Athens? Until next time!